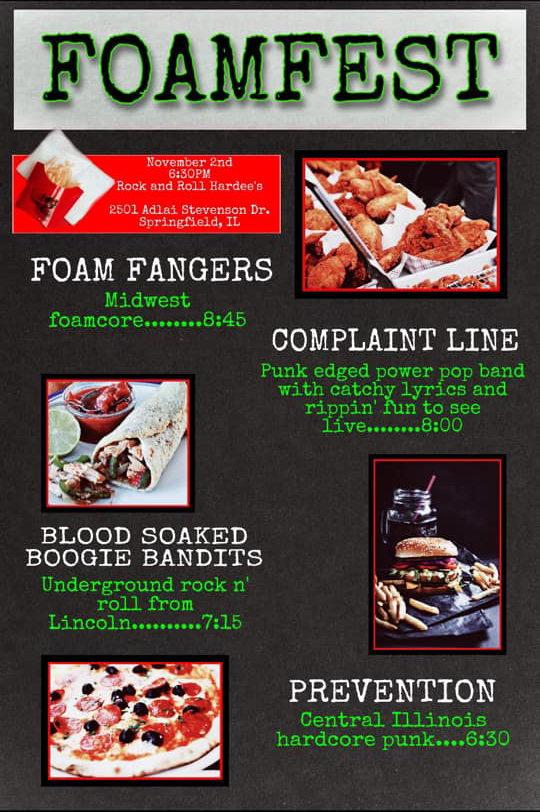 What’s this, there is something happening at Rock N’ Roll Hardee’s one week from today… on Saturday November 2nd?? This is “Foamfest” being put together by Foam Fangers… which looks to us like a regular four band show happening at Hardee’s! As you can see we got some pizza, chicken, and burritos on the flier, but we are not sure if all of those things are currently on the Hardee’s menu. To see an official up to date Hardee’s menu, go to the Hardee’s website right here. Who is playing Foamfest?? At the top of the bill of course is Foam Fangers. We also have 90’s-sounding alternative / power pop band The Complaint Line rockin’ it. We also have… The Blood-Soaked Boogie Bandits! What a nice Halloween-themed act. Looks like opening things up is Prevention, who just played here last night!

Foamfest starts at 6:30pm according to the flier, and it’s free. Check out a facebook event for this one right here. Our weather radar tells us it’s going to be a nice high of 48 degrees and low of 31 on that day with clear skies, we’ll keep an on that weather! Find a list of other shows going on around Springfield on our shows page. 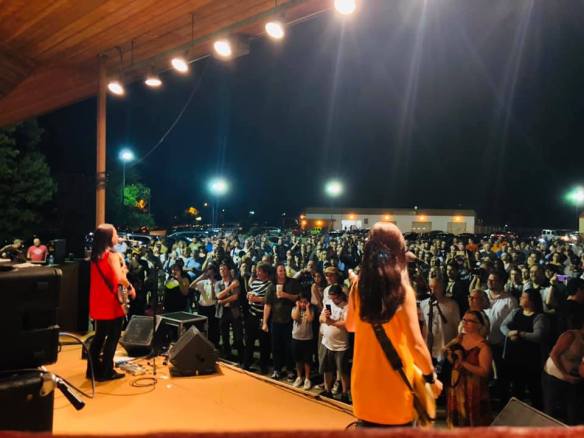 Last night, true Springfield rock and roll history was made!! If you were among the hundreds in attendance last night, then you could probably feel just how magical it was. We feel the need to once again thank everyone who helped make last night possible – of course thank you Shonen Knife and The Hooten Hallers for coming and playing! Thank you Slingshot Dakota and coming and playing an aftershow in our own space as well! Thank you Jason Perry for being the one to originally get in touch with Shonen Knife about playing here in the first place, we can not take credit for getting the band! Thank you of course to Rock N’ Roll Hardee’s for being the best Rock N’ Roll Hardee’s in the world, and to this tweet from Sean Neumann for going completely viral yesterday. And of course thank you to all of the sponsors that were willing to chip in to help us meet the funding we needed to make the concert possible and for free to the whole community! Those are:

And of course thank you all for coming out, that was by far the biggest turnout event on a Monday night in Springfield we have ever seen!! 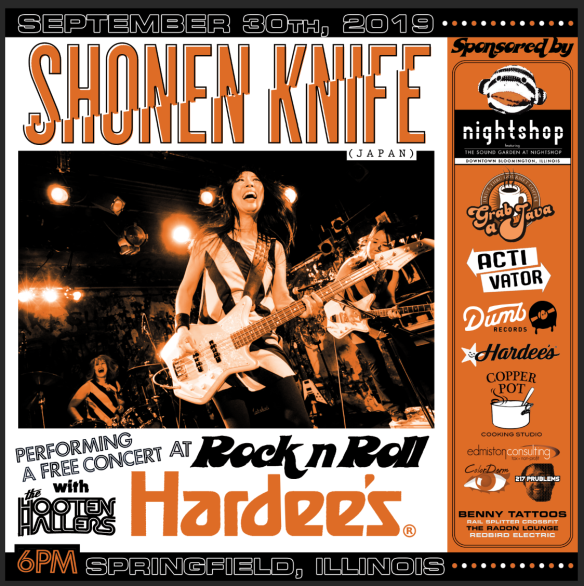 A lot of you may have been dying to know what our secret international band we were trying to book at Rock N’ Roll Hardee’s when we announced that we were looking for sponsors to make this happen earlier this summer. Well tonight we are letting the beans out of the bag! The show is happening Monday, September 30th and our big secret band is Shonen Knife from Japan!

Shonen Knife is an alternative rock band formed in Osaka, in 1981. Heavily influenced by 1960s girl groups, pop bands, The Beach Boys, and early punk rock bands, such as the Ramones, the trio crafts stripped-down songs with simple, yet uncoventional lyrics sung both in Japanese and English.

From November 24 to December 11, Shonen Knife toured with Nirvana and Eugenious all over the UK for a total of nine shows and during the tour Naoko taught Cobain how to play “Twist Barbie”, which Nirvana covered live at one of their secret shows.

Of course we have to send out a big thank you to all of our sponsors that answered our call to help in donations to make this free to the public show a reality. Those sponsors are listed out here, support these businesses!

Shonen Knife will be touring this time around with an opener “The Hooten Hallers” which from our understanding have actually played Springfield at Bar None before, and they are from Missouri.

The start time for this event is going to be right at 6:00 pm (don’t be late)! It is free, but we will gratefully accept donations at the show and even before to make sure we have enough to cover costs of pulling this off (we did fall short of our goal with our sponsors, but are still to the point where it is happening no matter what). Find a facebook event for this one right here. 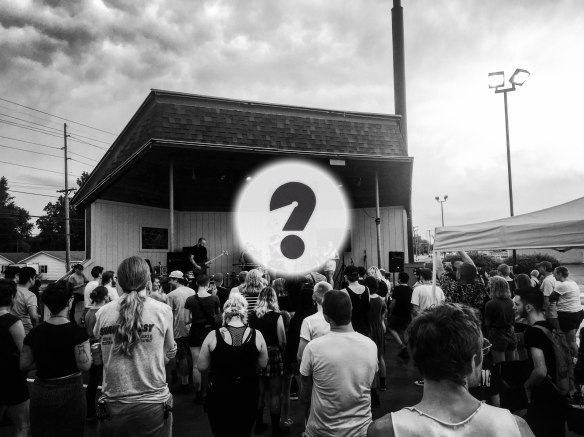 Earlier this month we put a feeler out there hinting that we were possibly going to be taking on helping book another huge show at Rock N’ Roll Hardee’s this fall. The teaser went well and we got a good amount of interest in potential sponsors that would be willing to help fund the concert to make sure it could happen as a free show out at the legendary Stevenson Hardee’s stage.

If you are at all interested, please email us at dumbrecs@gmail.com or call us at 217-691-8991. All sponsors will be listed on the final poster which will be going up along with the big announcement, and distributed around town. Your logo or name will also be up on a banner at the event, and we also have limited table or tent space for potential sponsors to set up depending on who is interested. Thank you! 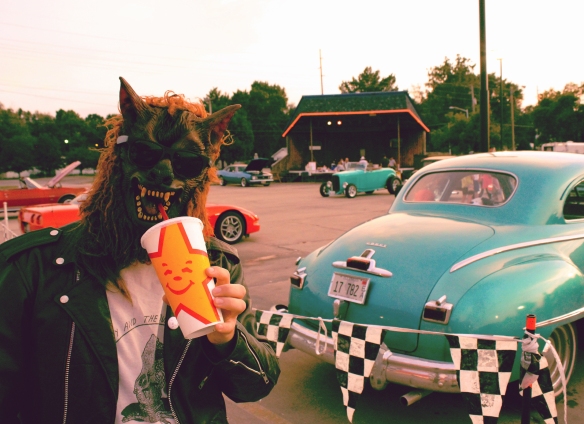 Good afternoon! We’ve never made a post on our website like this one before. This is a post to let you know a really really big (free) show might potentially be happening at Rock N’ Roll Hardee’s on Monday, September 30th – however we need to put a feeler out to make sure we can pull it off.

We do not have things locked in and confirmed with a potential band from overseas that would be playing at Rock N’ Roll Hardee’s on September 30th, so unfortunately we can not tell you what it is, other than that it will be the biggest thing we will have pulled off setting up there. The band does have a guarantee that we are trying to get met – and having the show at Hardee’s would mean we would not be able to charge admission, which would mean we would need to meet the guarantee for the band’s costs, and also additional costs such as sound setup through sponsors for the event.

SO, with this post we are reaching out to any potential sponsors – which could mean local businesses, or individual people that can help us make this happen. We know that it might be odd asking for this without being able to say who the band is, but trust us, if it happens it’s going to be good. You can reach out to us by coming in our store, emailing dumbrecs@gmail.com or calling 217-691-8991. We would be up for working with different sponsorship levels to make sure the event happens. Also sponsors would potentially get their name or logo listed on a poster that gets distributed all over town, potential radio mentions, and table or booth space at the actual event. We are flexible on what can happen here! 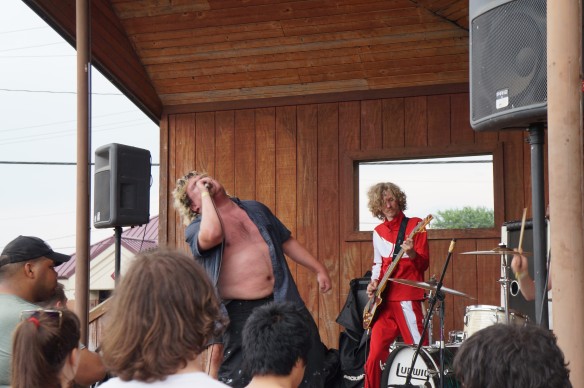 Chicago-based newspaper and new site the Chicago Reader has published an article covering the Rock N’ Roll Hardee’s show that took place this past Sunday as a part of Dumb Fest – “Rock n’ Roll Hardee’s hosts the finale of Springfield punk party Dumb Fest.” The article takes a look at Hardee’s as a venue for punk shows in Springfield and how accepting the management over there has been to this new and interesting partnership with the Springfield punk scene. From the article (written by Sean Neumann):

“This is my first time really listening to music like this,” Neal says. “It’s interesting to see how the kids dress now, because they dress very different. I’ve never seen so many kids with so many holes in their heads.”

You can check out the full article online right here. Also expect a few pictures and videos from Rock N’ Roll Hardee’s and the other Dumb Fest shows to surface on our site throughout the next few weeks!