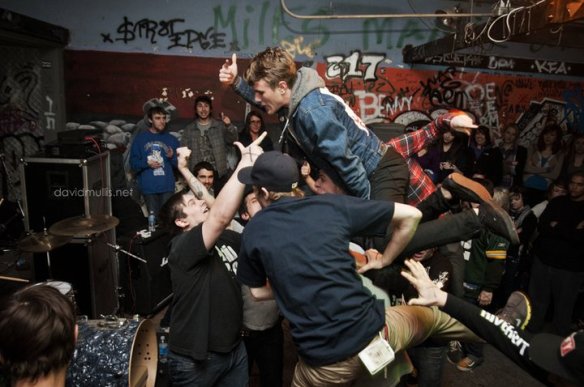 Big Mouth was a four piece straight edge hardcore band that started practicing in August of 2010.  Wanting to play classic 80’s youth crew in the vein of Expired Youth, Gorilla Biscuits, and Youth of Today both Justin Stewart and Kevin Bradford were determined to start something.  With the help of friends Brennen Wilkinson and Alex Nelson the band played it’s first show in September of that year (which incidentially was Commodity’s last show).  After that first outing Alex went away to go to school and Chris Mollet became the new singer.  Chris’ first show was the “Hardstyle House Show” at Ian Henson’s mom’s house.  Shortly after that show Justin got married to Stephanie and the two left for Arizona.  After the Stewarts left Daniel Joined on guitar and Brennen continued on bass recording the “Strong Voices EP” with Dog Years Records putting out a cassette for the band.  Around that period of time Big Mouth played FocusedXMinds’ first show in a baesment in Milwaukee and subsequentally played various shows the next three to four months with the band culminating in both bands’ (and Big Mouth’s only) tour which was a week long.  Before that tour Justin rejoined and Brennen stepped down to start Mind Riot and eventually Out Of Time.  The band also recorded the “We Are The Youth EP” and released it on Bandcamp and cassette via DYR in Feburuary.  Over the course of the summer of 2011 the band played a lot of fun shows at home in Springfield with Black Sheep Fest 2011 being the best by far.  After playing a few fall shows with friends Armada and Flatfoot 56 the band decided to call it quits in January of 2012.  Playing a fun, energizing last show in the sweaty bowels of The Black Sheep the band had a memorable last stand.