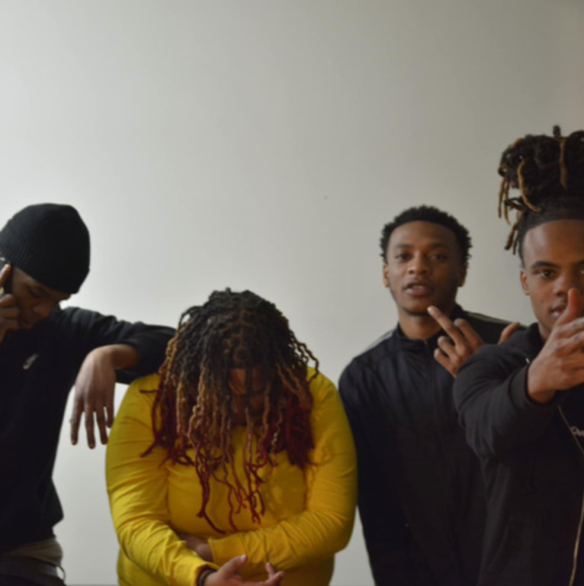 Today we bring you some brand new Springfield music in these times of stay-at-home orders, coming from local hip hop artist “Clutch.” Clutch has released twelve new tracks on her soundcloud page, and hinted that a proper tape release is on the way. We have the first of those three tracks – “Pain,” featuring YM Tae, “Research,” featuring Dunk, and “Hard Times” featuring ABM Kid all on separate players embedded below. Check out all of the tracks on Clutch’s soundcloud right here. 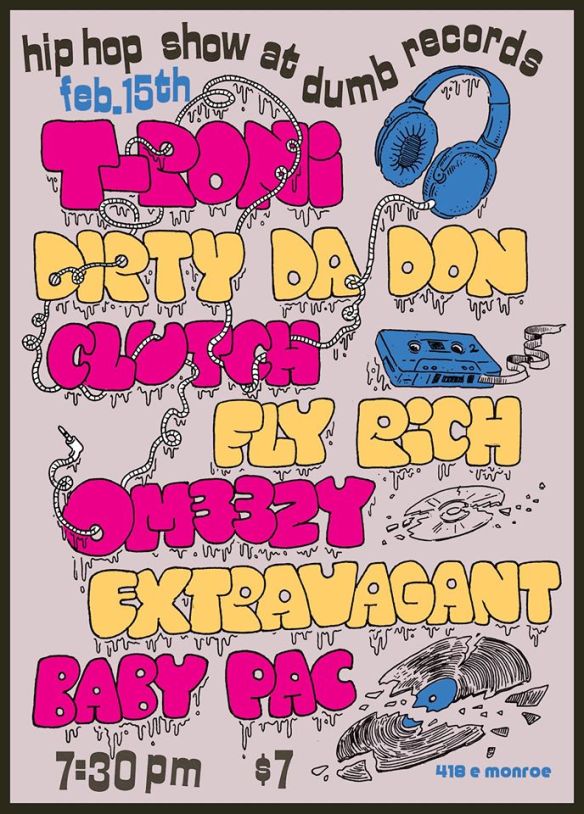 Today we are bringing you the announcement for our next hip hop show which is coming up QUICK on Saturday, February 15th, and is quite possibly the most stacked hip hop show we have ever put on here. There are SEVEN performers all on the bill for seven dollars, ALL of which have not yet performed at our new space here downtown. At the top of the bill we have the queen of 217 hip hop and one of the best in our area, T-Roni. T-Roni performed at Black Sheep as well as all over the country and has won numerous contests for her performances. Also on this show we have long running local hip hop act Dirty Da Don performing here at Dumb Records for the first time. Stream a new song featuring both Dirty Da Don and T-Roni below. CLUTCH is another one on the bill, a long time performer here in town and had been on a few shows back at Black Sheep! Before that we are gonna Fly Rich! With Fly Rich! Who else do we got… OM33ZY from the area who has worked with a good number of other local artists and performed a few times at Black Sheep. Towards the beginning of the lineup we got a newer artist going by “Extravagant.” Opening things up is the first Springfield performance for BabyPac, who moved here from Galesburg, IL a couple of years ago.

All of this starts at 7:30pm and admission is $7. Check out a facebook event for this one right here. Also be sure to check out our shows page for a good list of everything we have coming up at Dumb Records in the near future.

Today we have a mega-huge hip hop show to announce. This one is happening on Monday, April 6th at our space. We are especially excited about this one because it features a great lineup of national touring and very notable hip hop acts. One of those being “Aceyalone” from California and an active rapper since 1988. We have his 2001 album streaming on the player below. Aceyalone is coming with a whole group of artists, including Cas Metah and Mouf Warren from Ohio. “Blast Mega” and “Lee G” are a part of the tour as well. Then for local acts, this makes a lineup the biggest we have ever seen for a hip hop show at our space. We’ve got… some familiar acts to our stage including Cornbread, Zach Moad & Young Frost. Some unfamiliar acts but some who may have performed at Black Sheep include… Xtortion Da Don, Agent Orange, and Prez A Dent. There’s more??

All of that is only costing $7 admission… doors are opening at 7:00 pm. Check out a facebook event for this one right here. Also be sure to check out our shows page for a good look at what else is coming up at our space.

Today we are bringing you the first (?) local release of 2020 that we’ve had featured on this site? We know there are a couple of more releases that have already come out from local bands and acts this year, and we have some catching up to do! This one is from a local hip hop act that we have not yet covered on our site, called CHRxS. CHRxS just released a six-track, BLK HRT EP which you can find streaming on the Soundcloud player embedded below.

We don’t know anything about live shows for CHRxS just yet. This is the first one we are adding for 2020 for our Springfield album archive page. Nice.

Here’s another very recent local hip hop release that came out last month that we now know about thanks to Ken No of Hip Hop Humpday and Activator Magazine. It is a compilation of songs of artists – 27 songs in fact – put together by DJ Reco, called Dope: The Mixtape. The cover features a building we are somewhat familiar with. The mixtape is streaming on Datpiff.com and you can check it out right here. Can we embed players from Datpiff??? Let’s see… Yes!!? Does that player right down there work? Awesome!

We are adding this release to our Springfield album archive page, bringing us to 33 releases that we’ve kept track of so far this year and 459 total. 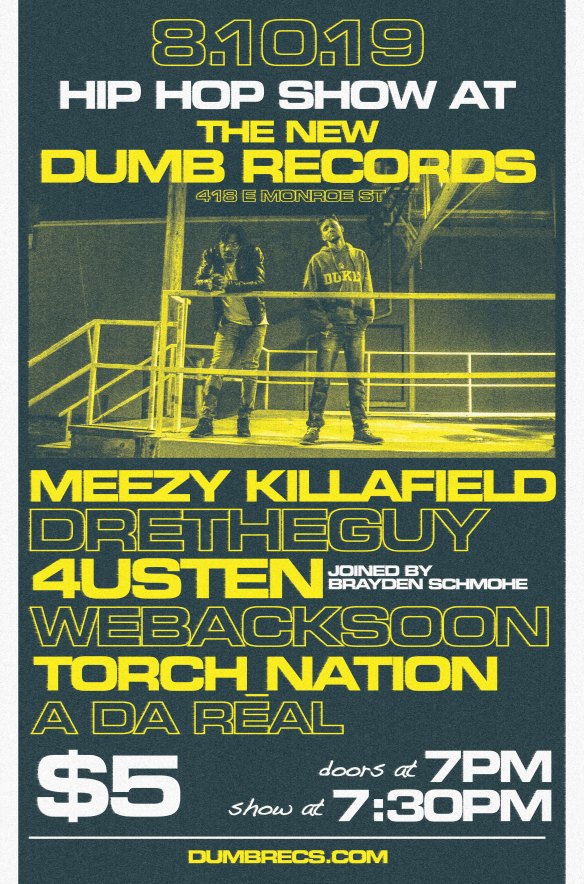 This one may be a pretty last minute announcement from our end, but we’ve got a pretty stacked lineup for the next hip hop show happening at our space on Saturday, August 10th. There are six acts performing from the area. At the top of the bill is Meezy Killafield, who has been making a splash as a rapper from our area recently. He released an album – “The Killafield Chronicles” within this past year. Also on this show is DreTheGuy aka “DeAndre”, another hip hop artist who has performed at The Radon Lounge and also recently Rock N’ Roll Hardee’s. He just dropped an album called “Lapis Effect” just a few weeks ago. Then we got 4usten… what’s up with the “A” in this guy’s name being a “4”? Come to the show and find out. For some of his set he will be joined by Brayden Schmohe. Pictured on the flier and also playing from Decatur is the rap duo “WeBackSoon Music Group“. You can also find them streaming on the player below. Also is more of an R&B act called “Torch_Nation“, familiar to a number of the Dumb Records and Black Sheep open mics. Great to finally get him on a show! Opening things up is A Da Real, another young up and coming artist we are pretty sure from Springfield High School. Nice.

For this show we are saying doors are at 7:00 pm and we are starting things at 7:30 pm. Admission is $5. Check out a facebook event for this one right here. Also be sure to check out our shows page for a good list at what else is coming up at Dumb Bread in the near future. 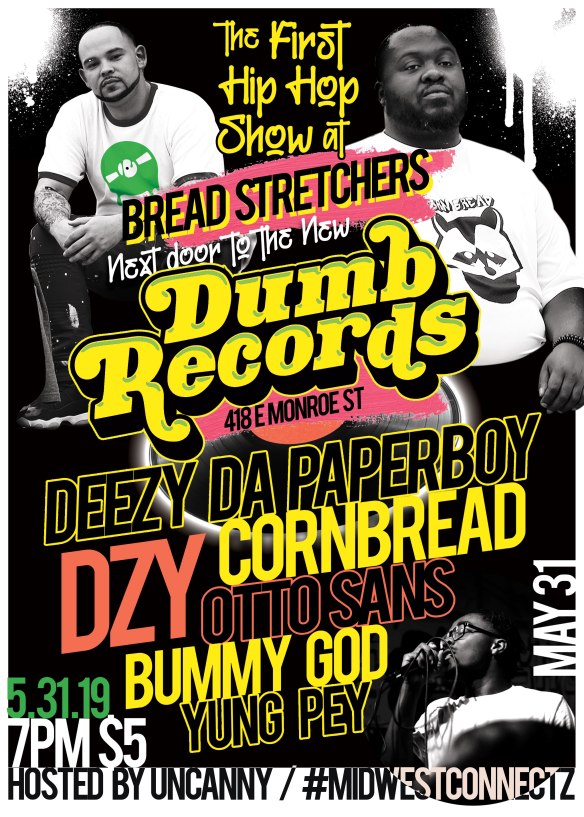 What a great weekend this is turning out to be! The official Levitt AMP Springfield Music Series had their kickoff last night which seemed like it was a great success, and we also have a pretty packed show next door to us. Tonight is the first ever hip hop show at the new “Bread Jammers” right next door to Dumb Records. Tonight at the top of the bill is Deezy Da Paperboy, very hard working rapper from these parts who is constantly putting out new music. Check out some of his stuff streaming on the player below. We’ve also got Cornbread – who’s been around doing his thing for a long time too – even since the early Bread Stretchers days. Then we got a few newer up and coming artists, including “DZY“. Also Otto San – who performed at Radon Lounge back in March. Then we’ve got “Bummygod” – younger artist who had performed at Black Sheep at one of our final shows there. And we’ve got Yung Pey opening things up!

This all starts at 7:00 pm and admission is $5. Check out a facebook event for the show right here. Also be sure to check out our Bread Stretchers shows page for a look at what is coming up in coming months.

After a full year, here is a wall of every show that has happened at Dumb Records downtown... and a couple that will never happen. Happy Sunday
All of this and more going out on the online store, see you out there on the online web.
Record of the Night (3-10-20): Toto - Isolation
Again... another round of stuff... most of this is all up on our discogs page, we’ll write you a stupid note if you order any of it. Currently 18 orders behind. https://www.discogs.com/seller/dumbrecords/profile
Here we go! New Friday new new records! We can do curb-side pickup or delivery! You let us know!
New arrivals for the day... but think of this as new arrivals added to our Discogs online store. We will ship, or deliver, or arrange a curbside pickup.