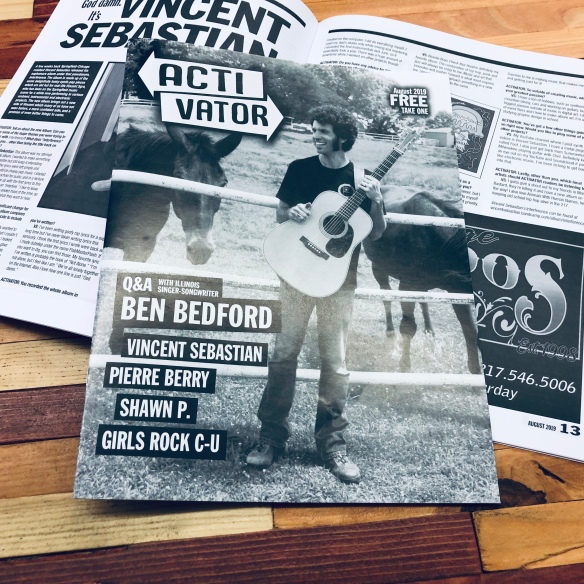 It’s a brand new month so we’ve got a brand new issue of Activator Magazine! The local / Central Illinois D.I.Y. Music-focused magazine has been going over one year strong at this point. Who has collected every issue?

On this month’s cover is local acoustic singer/songwriter Ben Bedford. Ben put out a new album The Hermit’s Spyglass at some point last year. His featured interview in Activator this month was actually conducted by Tom Irwin himself, another long time local musician.

You can also find album reviews, another interview with Vincent Sebastian, who also just put out a new album called Interference earlier this summer. In addition to all of this there is an interview with Pierre Berry – who has started “The Music Program Academy” teaching kids how to record and create music at the Salvation Army here in town. As usual, there is a writeup on the 217 hip hop scene put together by Ken No of “Hip Hop Hump Day” on 88.3 WQNA. Aaron Uncanny Phillips interviews local recording engineer at HISO Music, Shawn P. Christine Pallon of the bands Spandrels and Carly Beth out of Champaign/Urbana does a write-up on the recent “Girls Rock! 2019” event. There is a photospread from Audiofeed Music Festival which took place in Urbana last month, and as always Central Illinois and St. Louis live music calendars.