Local artist and musician Vincent Sebastian has released a new hit song and video for “Free Skin” which features another area musician Dexter Anodyne. You can stream the new song and check out the video on the player embedded below. And you can check it out on bandcamp along with the demo version and the “800% slower” version??!?

Vincent Sebastian released his hit album Interference a couple of years ago now in 2019. Also check out our vids/pics page for a long list of other local music videos from over the years.

The new local band The Lovelorn have released a new music video for their song “Hootin N’ Hollerin” last month. You can check out the video, which was shot by Elijah Settles / Mecoclub embedded below. The Lovelorn are a new local group that formed last year featuring members of No Good Deed and a few other past projects. This song is a track off of their debut album, May You Find Worth In The Waking World, which was released earlier this year and you can find online right here.

You can find a long list of local music videos shot over the years over on our vids/pics page.

Local band Local Drags have a new hit music video come out for one of their new hit songs, which is on their new hit record, Keep Me Glued, which is available at Springfield’s very own hit record store Dumb Records on vinyl. This video premiered about a month ago now on punknews.org, so the project has officially made the big times. You can also stream the video embedded below.

Keep Me Glued is the band’s second album which was released on Stardumb Records. You can stream the entire album online right here. Also check out our vids/pics page for a long list of other local music videos shot over the years.

Happy Christmas! Did you think we were going to stop on our streak of reporting local music news for Christmas? No! No thank you! Today we are bringing you a brand new music video that was recently released by Jacksonville-based psychedelic group The Dixie Narcos. That is a video for the song “Open The Mouth I Met” which is a track off of the band’s Godin Drag EP that was released just earlier this month. The video is an animation done by Robin Barnes and you can check it out on the player embedded below.

Check out more local music videos from over the years on our vids/pics page.

Legendary 217 hip hop artist “Cornbread” has unleashed a new video for his song “Fly.” The song comes from Cornbread’s latest full length album entitled Negros & Jazz, which unfortunately seems to have been recently taken off of bandcamp. Ope, it’s still on Apple Music right here. Either way, you can still listen to the song “Fly” and check it out on the player below. This one was shot and directed by Twenty One Seven Studios.

Negros & Jazz is in the running in the best hip hop release of 2020 as part of our ongoing Best of Local Music 2020 poll. Check out more music videos shot over the years on our pics/vids page.

Here’s some new music from Peoria-based musician Jared Grabb – a whole new release of recreated cover songs and also a new music video! Normally we keep it to what’s going on in Springfield on our site but this one is being presented by “First Try Sessions“, the newly created organization by Jess and Brandon Carnes of Looming aimed at curating music lessons for 7-17 year olds in the area.

Jared Grabb (Scouts Honor, Angry Gods, The Forecast) is a singer-songwriter hailing from the mid-sized Midwestern city of Peoria, Illinois. Grabb has been performing under his own name since 2001. ‘First Try Sessions Presents: Rest On Us All’ is the sixth full-length album under Grabb’s own name and his first consisting of cover songs. The album’s most recent predecessor was ‘Among Thieves,’ which was released by Jared Grabb Among Thieves (full band) back in June of 2020.

‘…Rest On Us All’ is an acoustic affair with all instruments and recording performed by Jared Grabb himself. Most songs are made up of acoustic guitars with accordion and vocals, while banjo, electric guitar, and piano appear for occasional added flavor. The original performers covered on this album are disparate, including country artist Miranda Lambert, blues pianist Ray Charles, indie rockers The Thermals, electronic artists Sylvan Esso, and 1940s folk singer Woody Guthrie among others.

Donations taken in from downloads of the album through bandcamp go directly towards supporting First Try Sessions and their mission.

‘The Body, the Blood, the Machine’ by The Thermals is a classic 2000s indie/punk record about fascism and theocracy. Unfortunately, I missed opportunities to see this band live, but this album has been in my headphones for around a decade now. In 2015, I released an extremely limited run of lathe-cut LPs with live solo recordings of both “A Pillar of Salt” and “Returning to the Fold.” It felt good to record a proper multi-tracked version “Returning to the Fold” for this release. As for the video, it was inspired by my daughter’s recent obsession with the ‘Among Us’ video game. She formed the characters out of clay and then my wife, Becca Taylor, went on to animate them using stop motion. It’s intended to be rough and fun. I get a kick out of it, and I hope you will too.

Check out Jared Grabb’s video for “Returning To The Fold” below!

Local hip hop artist NBGR Wooskie has released a new song and video for a new track “Royal Rumble.” It was another one shot and edited by CourtBoy Visuals, and you can find it streaming on the player below.

We are not sure of any other recorded music NBGR Wooskie has out there right now! Check out a number of other music videos shot over the years on our vids/pics page.

Today we bring you a brand new music video from local artist Kid Ziggy, who is a part of the “Zippir Collective” hip hop collective. This song is in more of the pop direction and is called “Upside Down” – you can check out the song and video streaming on the player below. The song features Danny J, and was produced by RJC. The music video was shot by Elijah Settles.

It looks like the Zippir Collective also launched a brand new website at some point recently (Zippircollective.com) and the collective will also be dropping a new EP called Zippir Vol. 1 later this upcoming week on October 23rd. We will be reporting back as soon as that EP is up for streaming.

Check out our vids/pics page for more music videos shot over the years.

New song and video from Deezy Da Paperboy alert! Deezy is a Lincoln, Illinois-based hip hop artist who has been very active for the past few years. A couple of days ago he dropped a new song and video for “No Justice” also featuring Alexa Redd, which you can check out on the player embedded below. From the youtube page:

“No Justice” – By Deezy Da Paperboy (feat. Alexa Redd) is a Song about societal inequality, systemic racism, human rights activism and peaceful protest, to help bring about much needed cultural change. its crazy to me, because we recorded this song roughly 2 years ago, and the Relevance today is still just as Pure as when it was inspired, I fight everyday for Equal Justice through out all Race, tax brackets, and cultures, when there is #NoJustice There will be #NoPeace – Deezy Da Paperboy

Also check out our vids/pics page for a long list of other local music videos shot over the years. 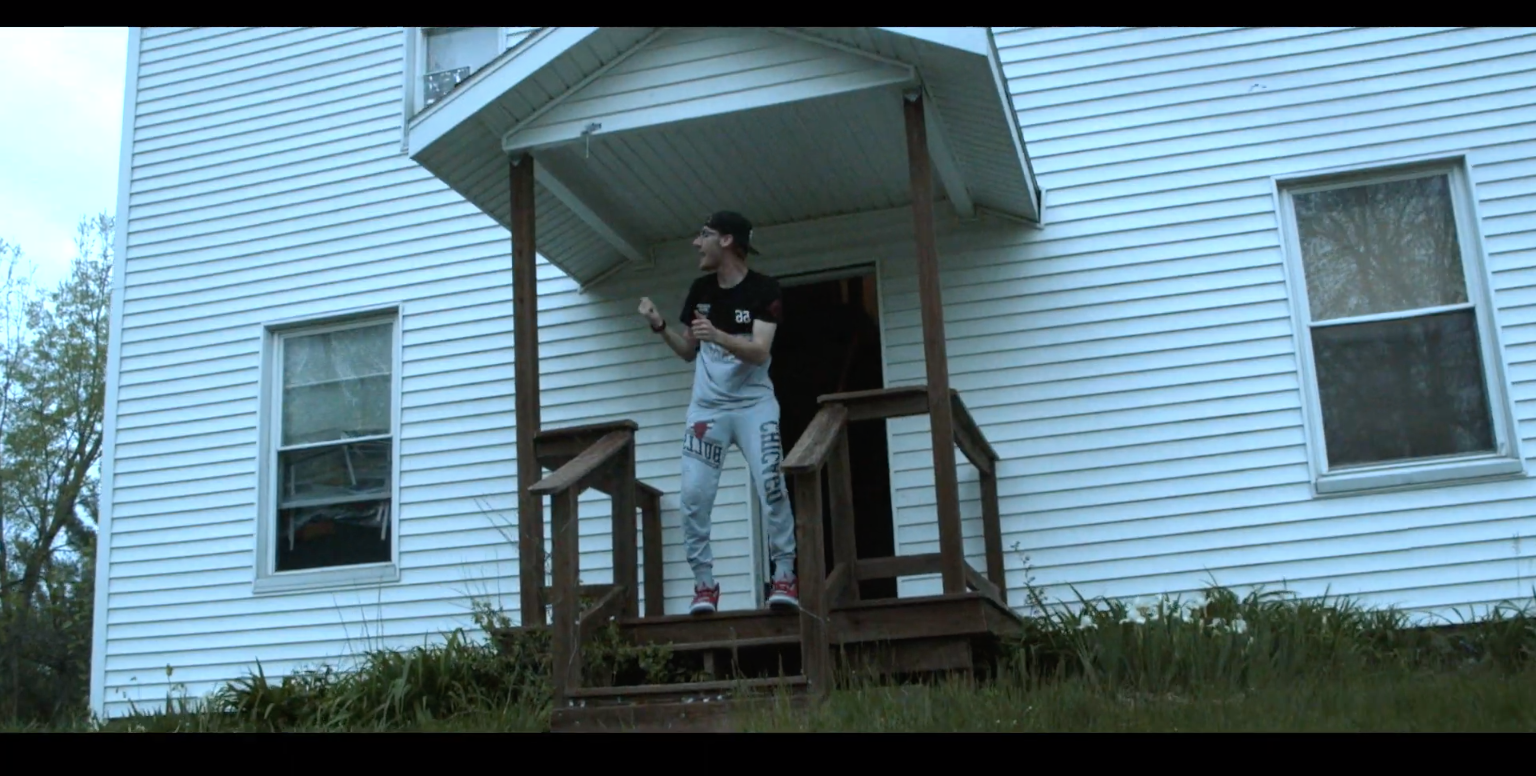 Since the duo of Zach Moad and Young Frost have dropped their album, High Definition earlier this summer, they are now very busy releasing a good handful of music videos from songs from that album. The two are part of the Vision Glory Entertainment collective. They have recently dropped three music videos: for the songs “Cash Out“, “The Clique” and “BackGround.” The most recent of those being “BackGround” was released just a couple of days ago and you can find that embedded on the player below.

You can check out the rest of High Definition online right here. Also check out our vids/pics page for a long list of local music videos shot over the years.

Welcome to the official Dumb Records website! Our store at 418 E Monroe Street is currently open from 10am-7pm every day. Our arcade is also open those same hours!

Check out our Discogs site with over 5,000 LPs and CDs in stock HERE.