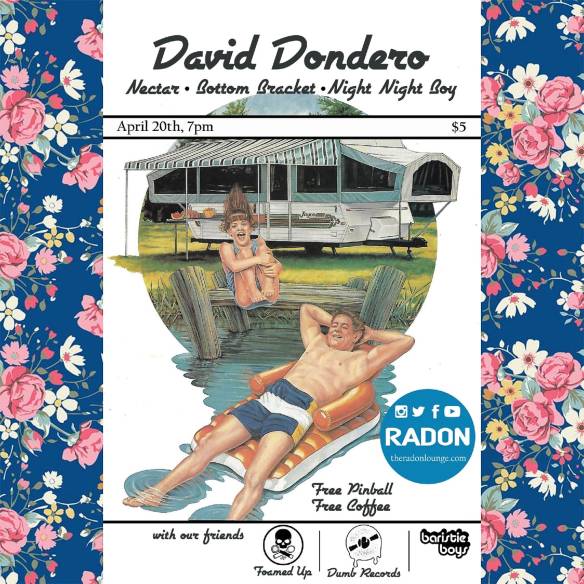 What’s going on this weekend coming up around town? Well, we don’t have anything lined up at Bread Stretchers Friday or Saturday (we do have a show Sunday), but there is this really cool show happening at The Radon Lounge on Saturday, April 20th that you should probably know about! This is actually The Radon’s last show for the season! They’ll be back in the fall after this. For this show they’ve got some big NPR featured guy, David Dondero at the top of the bill. Where’s this guy from, Chicago? Stream some of his music on the player below. Radon has got a solid group of local acts this time around as well. This includes Nectar from Champaign and very familiar to Springfield – who just released their album “Knocking at the Door” on LP which we have copies of at Dumb. Bottom Bracket are playing, great. Night Night Boy are playing as well – the second show for the new Springfield supergroup lineup featuring members of Park, Looming, and Soap Scum!

This show starts at 7:00 pm and admission is $5. Check out a facebook event for the show here. We told Jeff that we’d be doing something as Dumb Records but we are not completely sure what. We think our old man mascot is going to be handing out old 45s to show goers from his trousers, we’ll see. Check out our Springfield shows page for other non-Bread Stretchers shows here.