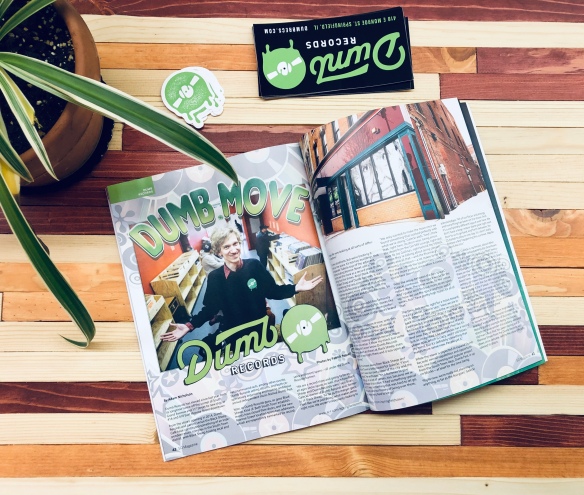 We are thrilled to be once again featured in SJ-R related publication Springfield’s Own Magazine with the article “Dumb Move” in the March/April issue which just recently came out hot off the presses. The article was written by Adam Nicholson and talks with Dumb owner Brian Galecki on the big dumb move to our new downtown location and how everything has been going with that so far. From the article:

Commensurately, downtown might stand to benefit from Dumb Records’ distinctive brand of levity in the face of business — one literally glaring example of being the backlit, storefront-wide poster of a rubbery, wrinkled old man’s face that has been staring out at Monroe Street from the Dumb Records windows since January, before the store officially opened its doors.

“It was a last-minute thing,” Galecki says of the garish fascinator–his idea— “and I’m very happy. I wouldn’t have done it any way different, looking back on it. It was perfect. And it’s still there. We’re having fun with it. We’re having fun with the announcement of us moving. And it’s also the way we ran our business in Southtown. Dumb Records: we kind of live up to the name a lot of the time. We’re not afraid to do things that other businesses would look at and call dumb. Like Free Record Day, just what it sounds like, or blowing up a 15-foot orange ball in front of the store. All sorts of goofy stuff. Doing that face and everything, it was just like taking that with us. I’ve been told that maybe this is the more grown-up version of Black Sheep and Dumb Records in some ways, but at the same time, we want to show that we’re not afraid to still be fun and do ridiculous stuff.”

You can find copies of Springfield’s Own Magazine for the full article for sale at Barnes And Noble, Quik N Eazy, or HyVee.