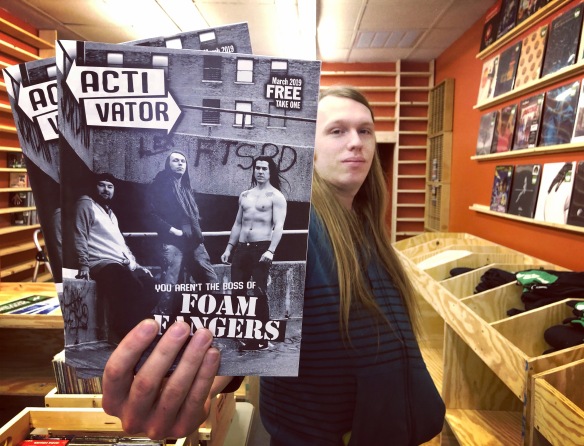 The newest issue of Activator Magazine for March 2019 is out and now available for free at Dumb Records (and has been for nearly a week now, wow!) As you can see, the issue features American Springfield punk rock band Foam Fangers pictured on the cover. You aren’t the boss of them! This issue features album reviews and show calendars as usual, and also poetry. We have a nice update and write-up on things have been going over at the new Dumb Records here downtown, also an informative piece on the state of WQNA by Ken No. There’s a concert review for “Grouper” by David Gracon, an interview with downtown brewery Buzz Bomb and “Buzz Fest” they have coming up, and an interview with Lucky Patterson of The Wolf Crick Boys, and also local rapper “Deezy Da Paperboy”, and other local rapper “City” (Kool Krew). And more! It’s jam packed!

Also Activator added another level to their Patreon page which you can become a monthly donor for – for a $9 level you can receive a special monthly 16-page photo zine that the magazine is going to be putting out every month!? Wow!

We’ve also got plenty of back issues from the past few months of Activator available inside of our store right now as well!