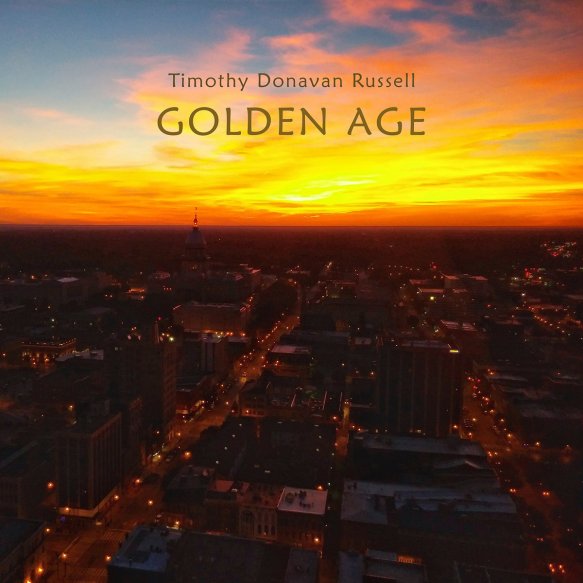 Today we bring you a new release that may be a couple of months old, but we are bringing it to you anyway. Here is another album by Springfield sound artist Tomothy Donavan Russell. It is called Golden Age going along with a notion by former Springfield poet Vachel Lindsay – that Springfield is to enter a “Golden Age” at some point around the year that we are in. The Pharmacy Art Gallery hosted an art show last month to go along with this prophecy. From an article in The Illinois Times:

In his 1920 novel, The Golden Book of Springfield, Vachel Lindsay conjured up mystical, utopian images of what his hometown of Springfield, Illinois, might look like in the “golden year” of 2018.
Now that time has caught up with Lindsay’s visionary book, the city and its artists have been paying tribute to Lindsay’s vision, none more elaborately than The Pharmacy Gallery and Art Space, which collaborated with the Vachel Lindsay Association on Friday, June 8, for a multimedia art opening / concert / dance party entitled “The Golden Age.”

You can stream Timothy Donovan Russell’s album on the player below. Also head to his bandcamp page to download the album at your own price.