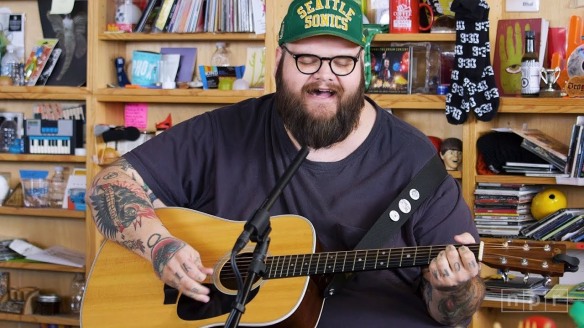 Holy cow would you believe it but it’s August and the summer is just about over. Tonight is the last of the ten part concert series that has been going on at downtown Springfield’s Y-Block most of this summer since the end of May. From The Skatalites, to the Dirty Dozen Brass band and much more, it’s been quite the series of free concerts for everyone to enjoy. Tonight the main act coming in from Tulsa, Oklahoma is solo Americana act John Moreland. From the Levitt AMP site:

Today, Moreland’s understated melodies and uncanny knack for storytelling have left an unmistakable mark on the Americana music scene. The troubadour has received coverage from outlets including No Depression, The New York Times and The Wall Street Journal among others. He has released four studio albums, with his latest, 2017’s Big Bad Luv, hailed as one of the best Americana/folk releases of the year by fans and critics alike, earning glowing write-ups in Rolling Stone and The New Yorker among others. He has enchanted the The Late Show with Stephen Colbert’s in-studio audience, is a regular opener for Jason Isbell and has had three songs featured on FX’s hit show Sons of Anarchy. Along with Miranda Lambert, Moreland has a super fan in the form of MSNBC host Rachel Maddow, who tweeted “If the American music business made any sense, guys like John Moreland would be household names.”

Check out John Moreland’s music streaming on the player below. The opening act tonight is Edward David Anderson. That starts off at 6:00 pm out on the Y-Block next to the governor’s mansion downtown and goes until 8:30 pm. It’s free to the public. Check out a facebook event for the concert right here. Also don’t forget we are having a show tonight afterwards at 8:00 pm!