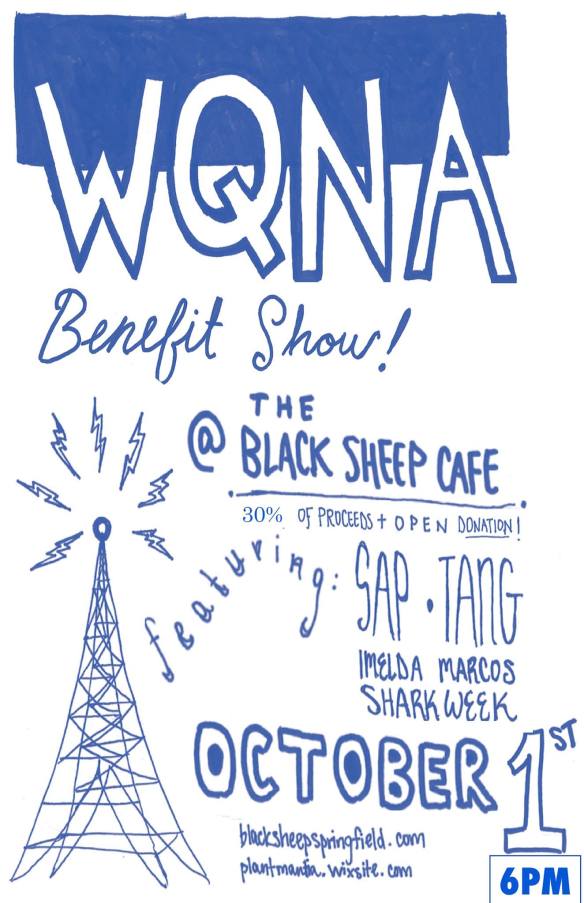 We are mixing things up a little bit more at Black Sheep with this benefit show happening here at the very start of next month on Saturday, October 1st. This one will be a benefit show for local radio station WQNA 88.3, also the station that hosts the Black Sheep Radio Show every Friday. Recently WQNA’s transmitters suffered damage from a storm, which then inspired the idea for a benefit. Part of the proceeds for this show will be going to WQNA. On the bill we have Springfield three piece band SAP. We also have TANG– the band, not the drink, which features Ted Keylon who also has a program on 88.3. Then is The Good Companions featuring Danny Kerwin of Monophonic-Stereo Show on Monday nights. We have one touring band on the bill here, and that is Chicago’s Imelda Marcos. You can check out some music by them streaming on the player below. Then opening things up is Shark Week.

This show will begin at 6:00 pm and admission is $7. You can find a facebook event for this show right here. Also be sure to check out our shows page for a good look at what else is coming up at Black Sheep in the near future.